THE STRATEGIC STAKEHOLDERS’ SEMINAR ON ENVIRONMENT AND SAFETY 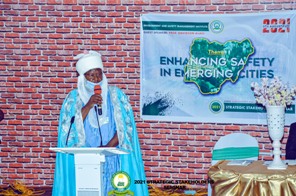 The seminar which was held at the conference hall of the Lagos State House, central business area Abuja on the 5th day of August 2021 started with the National prayer and followed by the National Anthem.

In a welcome address of the Director General of the Institute Chief Benedict Utille which was read by the national President Martin Iorsamber, the DG traced the conditions that necessitated the establishment of the institute in 2015. He explained that the institute was established as a child of necessity to offer support to both government and the private sector in the areas of manpower development, policy formulation and research development in order to enhance safety of the environment and the people. He stressed the need for an intra-government synergy amongst ministries, departments and agencies in order to build a good platform that will enhance the safety of the people and the environment. He announced that the Environment and Safety Management Institute was ready to play a leading role in building such synergy. The DG concluded by calling on the government and spirited individuals to support the institute to build the proposed Environment and Safety Research Centre which is the first of its kind in Africa saying such centre will bring unprecedented benefits to the government and people of Nigeria.

Declaring the Seminar Open on behalf of the SGF, the Emir of Nasarawa and former Minister of Environment Alh. Ibrahim Jibril, said the issues of environmental safety are seriously affecting humanity both locally and globally ranging from environmental issues such as flooding to issues of social safety such as banditry and urban insecurity. He called on government agencies present at the seminar to team up with ESMI in order to tackle the challenges of environmental and social safety.

In his keynote address on the theme: Enhancing safety in Emerging cities, Prof. Davidson Alaci, a professor of urban planning from the University of Jos, X-rayed the issues of urban safety in Nigeria and chronicled the challenges faced in urban centers on the issue of planning. He advocated for an integrated approach towards urban infrastructure and commended the Environment and Safety Management Institute for initiating the strategic stakeholders’ seminar. The university don concluded by calling on the government to support the institute in order to sustain the program and make it a viable platform for policy reorientation. 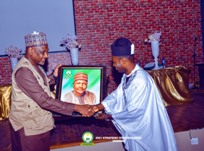 In another presentation on the topic: enhancing urban security in contemporary Nigeria, a security expert and former commander of the defunct Special Anti Robbery Squad (SARS) in the FCT, CSP James Vandefan Rtd, said security is the responsibility of everyone and must be invested in intentionally. He said the inefficiency of security agencies and other paramilitary organizations such as the fire service is hinged on the issue of poor town planning and deficiency in infrastructure. He urged participants to look at the issue of safety from a holistic approach and commended the idea of bringing together various MDAs to brainstorm on the issues of safety of the environment and the people.

Various speakers at the event commended the initiative of the institute and urged the participants to take the presentations serious. They suggested that the institute should engage more with the government in order to create an intergovernmental synergy in the area of environment and safety management. 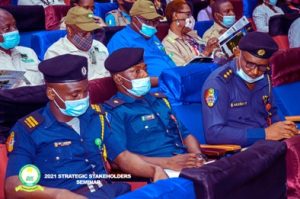 Participants at the seminar

The climax of the event was induction of new members of the institute who have undergone training and passed the prescribed examinations. It was followed by fellowship induction where thirteen new fellows were inducted among whom where the Emir of Nasarawa and former minister of Environment (state) Alh. Ibrahim Jibril, Director General of NESREA, Prof. Aliyu Jauro, Engr Sunday Edibo and ten others.

The Event came to an end with presentation of certificate of participation to all participants by the Registrar of the institute Mrs Agu Evelyn.