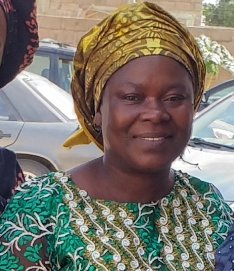 Mrs. Tabitha Lyocks Garba is a distinguished administrative manager and leader in the area of training in research works. She is dynamic and result oriented with a background in scientific arena and major in micro Biology with a flare audit strength in environmental Microbiology.

Tabitha attended the famous Ahmadu Bello University Zaria and graduated in 2003 where she obtained a Bachelor of Science Microbiology. She later went to Bayero University, Kano where she bagged a  Master of Public Policy and administration 2006.

She started her career as a Laboratory assistant at Vom Vertinary  Research Institute in 1991. She later worked as a Quality control officer at 7up Bottling company – 1993-1994. She continued  her career as Educational officer at Science Technology School Board, training students on biology – 1995-1997. She joined the federal Institute of Industrial Research Oshodi as Officer of FIIRO Kano – 2000. She became Unit head of FIIRO Abuja liaison office – 2005-2015. Presently Deputy Director, heading the North East zonal office of federal Institute of Industrial Research Yola.